This information is offered as a general guide only to assist in interpretation of information discussed in our website.

The generic term used to describe a combination of Polymer Films bonded together generally by solvent based or solventless adhesives. These are typically made up using 2, 3 or 4 individual plys depending on the properties required.

Laminates allow for the inclusion of printing that is "trapped" between the plys (reverse printing). 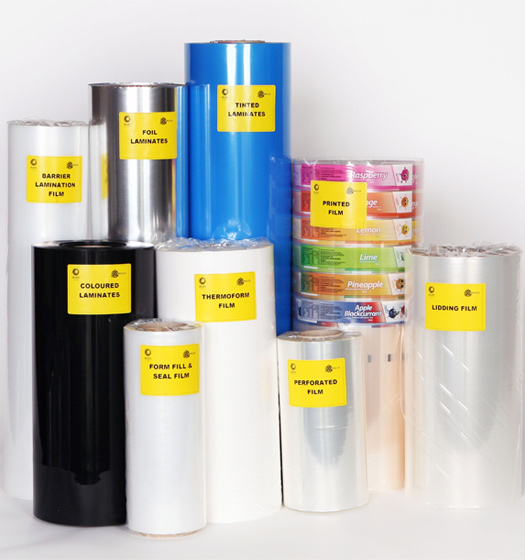 The term used to describe multilayered films of differing Polymers fused together using the “Extrusion” process. Generally this is either by the Blown (Annular Die) or Cast (Slot Die) process. Films produced using these processes differ in physical properties due to differing orientation of the Polymer molecules.

A coextruded film generally contains 2 up to 11 individual polymer layers fused together. Thus individual Polymers’ properties can be combined into a "single ply" structure.

Coextruded films can only be printed on the outside (surface printing).

Sometimes coextruded films are laminated to BON or PET to allow a combination of both techniques.

These films are a combination of different Polymer materials discussed in more detail under our POLYMER RESINS section.

This is a broad subject and we have endeavored to provide basic information of most of the common Polymers used in films.

This information explains some of the technical terms used when describing resins (and thus finished films) properties.